An epiphany - I must paint faster!

I had an epiphany while starting to paint these brutes:

In this moment of clarity I realised that I'm painting so slowly these days because I'm actually interested in getting better at painting and this is getting in the way of getting figures on the table. Take the recent Infinity figures and Xiufang. I've taken a long time to paint those figures to a reasonably high standard when they are actually gaming pieces and not display models. Okay, those particular models are one-offs and they are not in a unit of multiple figures, etc, but when starting the Silurids I felt myself falling into the trap of painting them to a higher standard than was really necessary. So I stopped myself and just blasted through them! They're not the best paint job I've ever done, but  they're not exactly crap either. Just a bit rough round the edges. So, if I'm ever going to get through my backlog and fulfill my pledge not to buy anything new, then I have to get my arse in gear. So next up are these two Infinity models:
I'll try and rattle these out, too, and not spend so much time on them. But...! I also want to keep pushing my skills so I'll paint the odd interesting figure in between cranking out the gaming miniatures. To that effect, I;m actually painting this rather nice sculpt for a friend:
The intention is to use some advanced techniques and see how close I can get to a professional standard. I'll try and post my progress and we can see how it goes!
Posted by Black Smoke at 23:45 4 comments:


One of my gaming activities that I don't think I've ever mentioned on this blog is a bit of roleplaying. It's easily one of the more minor parts of my hobby, but I do really enjoy it when each session rolls around and I enjoy reading scenario books, etc. My favourite system is easily Call of Cthulhu and there are a myriad source books out there, ranging from ancient Rome to modern conspiracies, but when I came across this Kickstarter, Achtung! Cthulhu!, it took me about a nanosecond to decide to back it. So, I thought I'd post it here to try and spread the word a bit, because I think this will be a great source of ideas for wargaming as well as roleplaying. So, if Weird War 2 with a healthy dose of everyone's favourite tentacled Great Old One tickles your fancy, then you'll probably find this quite enticing!

Didn't get any time to paint over the weekend, but managed to find time last night to finish off Xiufang. So here she is! 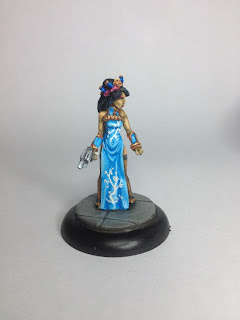 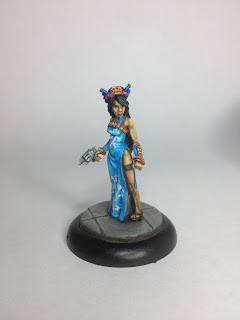 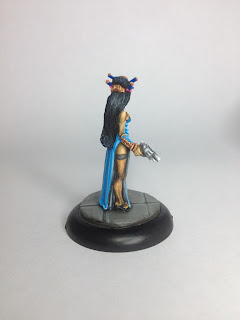 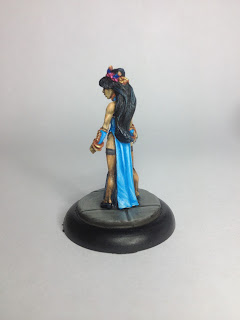 Despite my stated intention to paint the Pupnik next, I just can't motivate myself to do it yet, so I've prepped the Silurids from the Zoraida box set and they'll be next on the blocks!
Posted by Black Smoke at 12:02 4 comments:

A couple of weeks ago I bought a couple of Windsor & Newton Series 7 brushes, to see what all the fuss is about. I have to say...what a difference! I normally just use cheap synthetic brushes, but these sable brushes are so much better. I really don't know why I didn't move to sable earlier! I used to think that I must be quite hard on brushes and I thought the investment wouldn't be worth it as I'd just ruin them, but so far they have proved excellent at keeping a point and are reshaped with ease. I realise that, instead of being hard on brushes, the brushes I was using were just crap! :)

So, here's some WIP pictures of the Reaper Chronoscope figure that was next on the backlog. Progress is pretty slow, but I'm pretty pleased with the result...all thanks to the Series 7s! 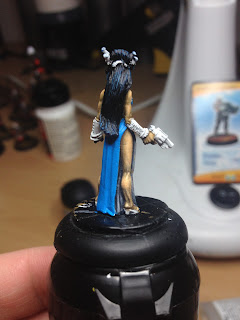 The skintone for her was my second attempt. I tried using the recipe for Chinese skin from the CoolMiniOrNot Ethnic Skintones article, but I was just not satisfied with it. Despite being colourblind I was sure it looked wrong and I solicited a couple of opinions that confirmed my suspicions. So I went back and repainted it with VMC English Uniform -> VMC Medium Skintone -> VMC Basic Skintone. Apparently this is much better and I'm told I got it spot on, so this is a major triumph for me! I actually picked my own paints and got it right! :)
So then I worked up the blue dress to try and make it look nice and silky and then added a bit of detailing in white. The pattern on the top half of the dress needs tidying, but overall I'm happy. So that's where I am and hopefully she'll be done by the weekend.

So, we left off with the trousers base coated in Foundry Forest Green, so that was quite quick to finish. I then did his puttees (or whatever they're called) in Foundry Rawhide, but I gave them a wee wash in Devlan Mud to give some depth. I wanted a bit more 'pop' when looking at the back of the figure so I decided to paint his bag in Foundry Moss. So it gives a bit of a focal point but is still quite earthy in tone.

After that I blocked his shoes and belt in VMC Leather Brown and applied a Devlan Mud wash (visible in the left pic above). And then it was onto the shield. Being all patriotic I decided to paint the pattern in red, white and blue. Actually, this was just a nice contrast to the muted earthy tones already applied and should really make him stand out in the shieldwall! The colours are :

And he's pretty much done! I finished off the leather and decided to tie his accoutrements (his sword scabbard, knife scabbard and necklace) into the shield colours, so his necklace is blue beads with a cross and his scabbards are Foundry Terracotta, which I thought gave a nice halfway house between the bright red of the shield and the browns and greens of the trousers, etc. I finished off the belt buckle and pommels etc in VMC Bronze -> Brass as I always find gold paints too yellow, and gold is probably a bit OTT, anyway.

All I need to do over the weekend is varnish the figure and he'll be in the mail on Monday. Hope you like it, Ray! :)

As I am painting up Ray's Viking I thought I'd post a 'plog' of the colours I used, etc. not really a tutorial, but just my ramblings about painting it!

First up, the metal. As there's a good bit of drybrushing to be done, I always do chainmail first, as it's easier to cover over the bits that missed than recover from getting metallic paint on a finished bit of the model. I tend to follow the same recipe for armour type metals: a heavy drybrush of VMC German Grey/VMC Gunmetal Grey (about 50/50), a second drybrush of just VMC Gunmetal Grey, a lighter drybrush of GW Boltgun Metal and a final drybrush of GW Chainmail. The pictures below aren't great, so it's hard to tell the progression of the lighter highlights, but they are there! :)
Next, I tackled the face, hands and beard. The whole lot was base coated in VMC Red Leather, as I decided Ray's Viking would be a red head. A little wash of Devlan mud around the beard gave it some definition and then the beard was drybrushed with VMC German Camo Orange Ochre and then VMC Yellow Ochre. The flesh was painted with VMC Beige Red and then a final highlight of VMC Basic Skintone. I wanted a pale flesh, as he's a bit podgy and I think he spends most of his days and nights at the ale house! It all turned out a bit too pale, though, and the beard lacked depth so I gave it a bit of attention with GW Ogryn Flesh wash.
Next I painted the tunic sleeves. For this I just used Foundry Boneyard, which I acquired recently and really like. I forgot to take individual shots, so here's just the finished arm. The photo is a bit washed out, but it looks better in person. 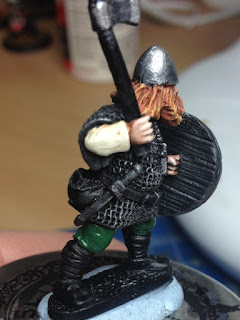 Lastly, I painted the trousers Foundry Forest Green shade, but I was too tired to do more. Hopefully I'll get it finished over the next night or so and post part 2.
Posted by Black Smoke at 20:40 3 comments:

On the painting table...

January was a pretty busy month on the blog, so I thought I'd keep the momentum up and talk about what is on the painting table this week. Since announcing my pledge to not buy any more figures* I have managed to keep to it, but I've only managed to knock 3 figures off the pile - the Reverend Custodier, Prowler and Sebastian. At this rate I'll not be buying anything till next year! So I need to keep forging ahead and I thought it might be a worthwhile exercise to post here what I intend to paint over the coming week and see whether I can make it.

First up is the Viking for Ray Rousell who won it in the giveaway on Wednesday. I've cleaned him up and primed him black, ready for the first lick of paint. 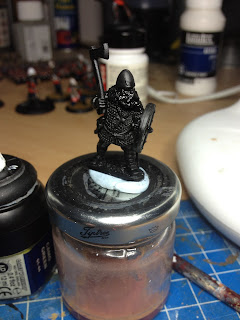 Next is a Reaper Chronoscope figure - Xiufang, Femme Fatale - that I've been itching to paint ever since I clapped eyes on her in Static Games in Glasgow. She doesn't really fit precisely into any one game that I play, but I think I could use her in 7TV or SuperSystem as either a hero or villain (though that might depend on the colour of the dress)! I didn't have any decent bases for her, so I mixed up some ProCreate and fashioned a flagstone like surface on the base provided. As I was pinning her on I decided that it would make sense to prime her white and the base black, which is something I've never done before! :) 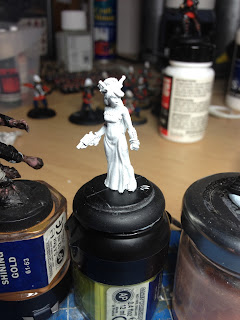 Finally we have a Pupnik from the Uberfallkommando for Infinity. I assembled and started this miniature last year (he makes an appearance in my post bemoaning multi part metal figures) and I simply got fed up and disillusioned by him. But after making a couple of good efforts with Infinity figures recently I decided to knuckle down and get it finished! 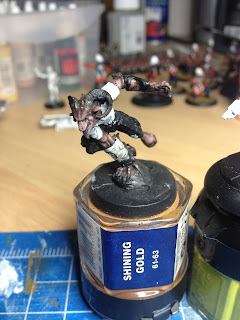