The Fists of Lo Chan Fu

Played my first game of In Her Majesty's Name tonight and it was really fun! I'll talk a bit about the rules in a while, but first, here's how Dr. Lo Chan Fu's first appearance went.

It is the turn on the century and the Brotherhood of the Fist has found an enigmatic and shadowy new leader, known as Lo Chan Fu. Rumours abound that this sinister figure is far older than he appears and, in fact, there is truth behind them. However, it is dependent on a very rare and expensive herb, which he has been having difficulty in getting. The reason behind the shortage is the activities of an organised criminal gang that has been controlling shipping out of Alexandria.

From his lair, deep in the deserts of Egypt, the reincarnated spirit of the ancient pharaoh Akhenaton has been leading the cult known as the Servant of Ra on a campaign to reclaim Egypt's ancient glory. Their gangs have descended on all the major ports in Egypt and have been extorting the merchants and sea captains for all they can get. The effect of this has to dramatically raise the price of the herbs needed by Lo Chan Fu, so he has personally arrived in Egypt with his daughter and a cadre of Fists from the Brotherhood to deal with the bothersome cultists. And with him has come a crate that the dock workers are afraid to approach due to the grunting and thumping coming from within...!

The mission we picked was a simple Last Man Standing one, where the two factions simply try to eliminate each other. George and I felt that was the easiest way to get to grips with the rules. So, without further ado, roll credits...!

This was a really fun game and had a really strong narrative, despite the simplicity of the mission. The rules themselves are really simple to get to grips with and within a few turns we were rarely looking at the book or even the QRS! But, being simple doesn't mean shallow and there are plenty of tactical decisions to be made, particularly with the alternating activations. I'll not go into detail on the rules as a Google search will throw up all the info you need, but essentially, what you have in IHMN, is a pretty elegant ruleset that provides you with a framework to create whatever factions you want and is easily adapted to the figures you have and the concepts you want to convey. In a time of huge, hardback books that cost a small fortune, In Her Majesty's Name is an absolute bargain for the price and I would highly recommend it if Victorian Steampunk skirmish gaming is an itch you have to scratch! I'll certainly be playing it again!
Posted by Black Smoke at 00:16 1 comment:

A couple of posts back I showed some photos of the figures I had bought from Black Hat Miniatures' Tales of the Dragon Kings range and compared them against the North Star In Her Majesty's Name figures. Seeing as we've now seen the latter with some paint splashed on I think it's only fair we see the Vampire Hunters likewise pigmented! So without further ado... 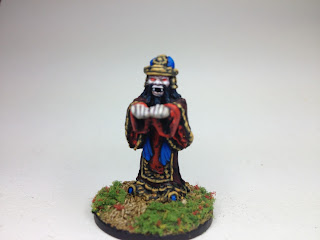 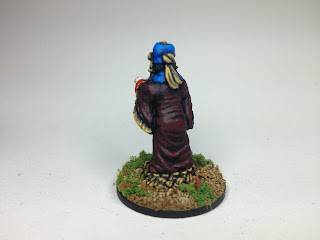 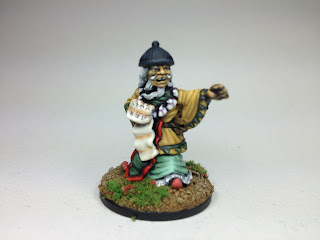 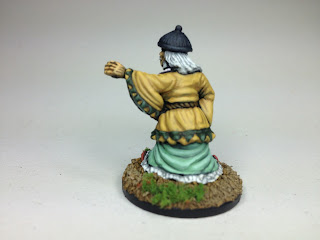 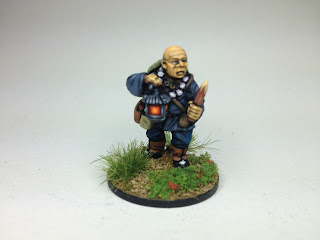 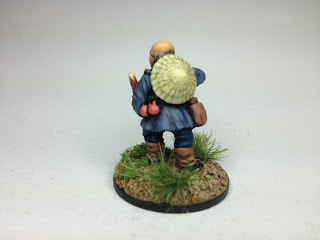 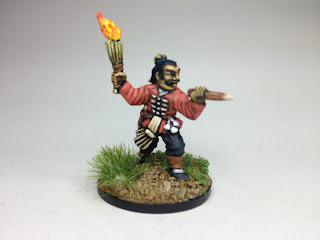 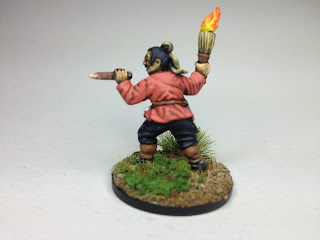 I. Love. These. Figures!! I think that some people might find them perhaps a little caricatured, but I just reckon they are bursting with character and were an absolute joy to paint. The detail is just right for my style of painting: not too detailed but not too bland either. All told, I'm delighted with these and will definitely be painting up more. I actually have the Chinese Ghosts pack to do next and then I'll be trying a wee adaptation of 7th Voyage to play a 'Mr. Vampire' game. So stay tuned for that and rest assured that holding your breath will feature heavily! :)
Posted by Black Smoke at 00:06 4 comments: