Last Tuesday my freshly painted Viking army got their first outing on the table and it was a really fun, tense game. George had intended to bring his Saxons, but an incident involving his foot and a step meant that they now need to go in for some repairs! So instead he brought his Romano-British forces and used them instead. OK, a little anachronistic, but still very Dark Ages! The scenario we played was the Cattle Raid from the Age of Arthur book and the Vikings were aptly determined as the raiders. In this game, the Vikings have raided a village while the main body of the defenders are away, but they have returned just in time to intercept the Norsemen leaving with the livestock and some villagers for the slave trade! There are 3 groups of 'baggage' that the raiders have to escort off the table and winning or losing revolves mainly around that. So I placed my forces in front of the road with the Bondi on the flanks. I gave them thrusting spears with the idea that they should be able to hold the flanks while the Hirdmen did the dirty work. The Hird was in the centre with throwing spears and javelins with the aim of taking the fight to the enemy. The bow armed Bondi were out on my right, which turned out to be the wrong flank, as I wanted them to weaken the cavalry that was inevitably going to be present. However, George massed them all against my left! And so to the battle!
Unfortunately I only had the camera in my phone and the lighting at the club can be a little low at some of the tables, so apologies for the fuzziness of some of the pictures.

This was a really fun game. It was very fluid and full of movement, rather than just two battle lines clashing. I think if George had been more aggressive with his Welsh horse he could have caught the last baggage group and won the battle, but as it was he let me pull him into a fight he couldn't really win. But we both really enjoyed it and that's what matters the most. And it just proved again that WAB really shines in Dark Ages battles with the heroes meeting up to the expectations of the Sagas and poems!

Would the real Yorktown please stand up! 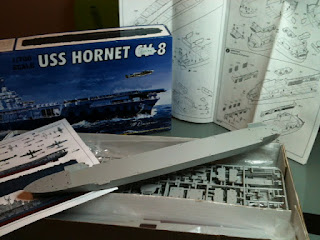 Well, after visiting Jamieson's Models it seems that Yorktown is, in fact, harder to find than hens teeth! So, I picked up a model of Hornet instead. Not perfect, but who cares, really? It's a big Yankee carrier to sit on a wargames table. I will probably paint it up in the colours of Yorktown for the game and then repaint as the Hornet if it's good enough to put on display. I must confess, though, I'm really enjoying building the model. Brings back lots of memories of building kits as a kid. I recall my ceiling was almost completely hidden behind a veritable armada of model planes hanging from it!
Posted by Black Smoke at 14:04 7 comments:

Email ThisBlogThis!Share to TwitterShare to FacebookShare to Pinterest
Labels: check your 6 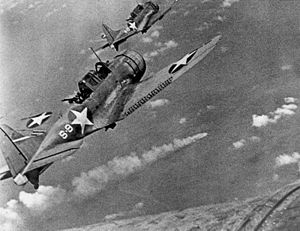 Akagi, Kaga, Soryu and Hiryu! For me, these are some of the most evocative names from the Second World War. They roll off the tongue with a kind of mysterious beauty; the distillation of raw Japanese aggression - the Samurai spirit. As a youth I recall watching the film Midway again and again, enthralled by the drama that unfolded before me each time. This was a battle full of mistakes, luck, bravery and myth and for those reasons it has always stayed a favourite, much like Rorke's Drift and Waterloo (due in no small part to their respective films, too!).

On the first Tuesday of every month my club puts on large multiplayer game that is open to anyone that turns up and in 2010 I ran a series of five Check Your 6! Battle of Britain games to commemorate the 70th anniversary. These were pretty successful and one of those nights holds the joint record for participants at a whopping 17 players. Since it has been more than a year since I organised a First Tuesday Game (or FTG as they are known), I was thinking about putting a one-off CY6! game together and the decision was instantly made when I realised that June would see the 70th anniversary of Midway. I also thought it might make an interesting series of posts to follow the assembly of the forces and the scenario design leading up to the game and an AAR once the dust settles.

So, let's start with the battle itself and some reading suggestions. I'm not going to go into detail as most people will probably be familiar already, but for those few that aren't, the Battle of Midway was fought on June 4th in the Central Pacific between the First Mobile Strike Force (Kido Butai) of the Imperial Japanese Navy (IJN) under Vice Admiral Nagumo Chuichi and two American carrier task forces under Admirals Frank J Fletcher and Raymond A Spruance. The Japanese committed all four fleet carriers available after the Coral Sea debacle against three American carriers and the aircraft available on the Midway atoll itself. The end result of the ensuing chaos was the loss of all four Japanese flight decks to just one American, the USS Yorktown. If you would like more information on the forces involved and the events that unfolded then you could check the Wikipedia entry and the BBC websites, although both are understandable quite thin on detail and, in fact, a bit wrong in some places. For a more detailed overview, then you can't go far wrong with the Osprey Campaign volume on Midway. However, by far the best book I've ever read on the subject is Shattered Sword, by Jonathan Parshall and Anthony Tully. This book goes into great detail and focuses primarily on the Japanese side of things, which is really the most interesting, as it was they who made all the mistakes and suffered from a real malaise in their operational and strategic planning. It also goes to great pains to dispel the 'overwhelming odds' and other myths associated with the battle.

As for the game, my first issue was exactly what to try and recreate in a single game. Clearly the number of ships and planes involved and the distances covered are not in the scope of a single game of CY6!, so I had to figure out what slice of the battle is appropriate. My initial, gut reaction was to game the final American attack on Hiryu, but the problem with that is that only the American SBD-3 Dauntless dive bombers attacked the ship and I think that this provides a limited amount of tactical scope to the players. All we end up with is a simple 'stop the bombers' scenario, with the Zeros trying to shoot down the bombers while avoiding the US Wildcats. What I think will work better is to have an attack by both high level dive bombers and low level torpedo bombers, so that the players need to consider splitting their forces and losing height to defend against the ultimately more deadly torpedoes. Well...that's where we fall flat on our face with American naval aviation at Midway. Of the 50 odd TBD Devastators that attacked the Japanese carrier group, almost all were shot down and not a single torpedo struck any ship, never mind a carrier!

So I think we need to turn our attention to the Yorktown. The Hiryu's counterstrike against the Americans isn't really perfect, either, as there was about an hour or so between the first dive-bomber attacks and the follow-up torpedo bomber attacks, but I think that I think having the two waves in the one game, one slightly later than the other, will be acceptable. I also think that this will make a slightly better scenario for the simple fact that the Japanese Type 91 torpedo was an excellent weapon and poses a much more deadly threat than it's American counterpart. In all honesty, if we were to do the American attacks on the Japanese carriers then I'd be compelled to impose such severe penalties on the torpedo attacks that the Japanese players would probably leave the Devastators to it! However, on the day, Yorktown was struck by two Japanese torpedoes which was the crippling blow to her, so gaming this attack makes more sense. Also, Yorktown was the only carrier that wasn't out-and-out destroyed on the 4th of June. In fact, she was being escorted back to Pearl Harbor a couple of days later, with hopes of repairing her, when she was struck by torpedoes from a Japanese submarine which finished her off. So, the damage to Yorktown had little effect on the battle as the Japanese fate was already sealed, so it seems a bit more fitting to see if the American players can save this tough old warhorse! The only downside is that I don't get to paint up any Dauntlesses, which is one of my all time favourite WWII aircraft!

The next step is to gather the models necessary and paint them up. Rather than going for the usual 1/300 planes I will use 1/600 models instead, as there are a few options for 1/700 models of the Yorktown. At that size, the difference in scale should be negligible and looking at smaller models on a big flat, blue surface should lend a slightly more panoramic feel to the game. Hopefully I should get my hands on a suitable model from the nice folk at Jamieson's Models in Glasgow and I will post some pics when I do and my progress in building it.