General Store in the Works

Another wee update on the World Works Games terrain. Here we have a General Store over two stories. As you can see, the second story just sits on the first so you can easily lift it off. The quality of the textures is first class and I'm really looking forward to getting more done. I have a dozen more floor tiles to finish and I'l probably concentrate on more tiles until I have at least 3 foot square.

I did some more cutting, folding and gluing last night. It seemed like I was doing it for an eternity with little progress, but I realised that I was actually doing the most fiddly bits - the anchors and posts. In the end, it turns out I made enough anchors to do my two tiles with plenty left over, all from one sheet. It was tedious, but easy. The posts were a bit more of a challenge. It was relatively straightforward to cut them (after reading the instructions - this is recommended!), but I found that folding them was a little difficult, as the dual layer of card means the outer layer doesn't quite wrap around the inner correctly. I'm sure there's a knack to it, but it was a little frustrating. It meant that I had to colour in a bit more than just the edge, but once assembled it all looked pretty good! I also tried a single wall and that was really quick to do, which is encouraging. It means that once I get enough posts and anchors done, I should be able to churn out the rest of the terrain pretty quickly!

Some terrain is on the cards!

Fuelled by the insane amount of fun we had with the Wild West game the other week, I decided to try and add some terrain into the mix. However, I don't have a lot of space to store large gaming pieces, so I thought I'd give the modular paper terrain offered by World Works Games a try. One of my boardgaming friends has a lot of paper terrain and his setups look stunning, so it seemed like a worthwhile thing to embark on. I've completed 6 of the tiles, which measure 6 inches square, but it did take me a bit longer than I'd have liked. I think that it'll get quicker with more practice, though. And I have to say, I am pleased with the result:

Gunfight at the Triple-G Corral

Played an excellent game of The Rules With No Name at the G3 Club tonight. George has quite a wee horde of cowboys and I managed to finish another few for my own gang, so we thought we'd duke it out Wild West style! Also taking part was my brother, Carl, so we had a three way shoot out at the Triple-G Corral!

The terrain was placed as above and my gang, the Barons, entered bottom left in the pic. Carl's gang, the Hogfields, entered in the next corner counter-clockwise and George, the Jones', from the far side corner. The common objective was a stash of loot being held by a suitable villainous character in the hotel in the top left of the picture. The scenario had a wee twist though. I decided that a neat way of counting VPs would be using playing cards, especially as we used poker chips for activation. Each time your gang kills another character then you get to draw a card, with numbered cards worth 1, face cards worth 2 and aces worth 3. But cards are also playable, with numbers allowing a re-roll, faces allowing you to roll 2 dice and pick the result and aces allowing you to declare a single dice to be whatever you want. So you can gain advantage but at a cost in VPs. The other wee twist is that each gang hates one of the others, in a cyclic way. So the Barons hate the Hogfields who hate the Jones' who hate the Barons. You get to draw an extra card if you plug one of your hated foes!

So on to the game. Each gang immediately made a beeline for the hotel, but Carl moved one bandito towards my corner. I duly activated one of my gunmen and took a potshot at long range. Scooter had obviously been down the range, as his bullet took the hated Hogfield lackey straight between the eyes. I then sent Beauregard Baron, my shootist, to my right to make sure of him and get into the Hogfield's flank.

Meanwhile, the rest of the Hogfields had made it into range of the Jones' and began firing wildly. George had a bit of a slow start and got a little bogged down in a fire fight. My legend Uncle Jess and Lucas were closing in on the hotel. From their position they got a good view of the action unfolding between the Hogfields and Jones' but were a bit too far away to intervene. However, their proximity to the hotel would pay dividends later!

Making a break from the gunfight, George's Legend, Frank Jones, made a run for the hotel and made it first, bursting in on the target. A quick draw duel saw the rich land owner wounded. As the gunshots rang out in the hotel, Uncle Jess told Lucas to cover the back of the hotel.
Back over at the Hogfields, a couple of barrels of grapeshot from Bill Elder, a Jones gunman, saw Bull Duvall, a Hogfield gunman, wounded. He lost his nerve and cowered behind the stables for the rest of the fight.

Hearing the gunshots from the hotel, Jesse Jones ran to help his brother out, but he didn't count on Lucas Baron who had been skulking around the corner of the hotel. As Jesse neared the door Lucas leaped out and shot him clean through the head!
Things were now finely in the balance. Just as his brother was gunned down, Frank finished off his mark and seized the loot. If he could make it off the table, George could still win, despite the Jones gang being sorely roughed up. The Hogfields were still bogged down trying to pick off the last Jones', but trouble was brewing for him as Beauregard and Scooter Baron were moving up behind them.

The last picture above shows Frank Jones finishing his mark off, but under the balcony lurks Uncle Jess Baron. Frank was the first to activate and ran out of the hotel, past Lucas and straight towards the board edge. But just not quite far enough. Crucially, Uncle Jess activated and claimed an action chip which let him activate again! He darted from his cover and let fly with his sawn-off shotgun!
In a nail-biting finale, the buckshot caught Frank Jones dead in his back and killed him outright. Uncle Jess ran over, grabbed the loot and was off like a hare! Lance Hogfield, Carl's Legend, managed to wound Bo and Scooter, but it was too late. The loot had fallen into the clutches of the Baron gang and was gone!

This was a most fun and entertaining game. The Rules With No Name give a really fun game with lots of flavour. Sure, there are is the oddity of only moving in a straight line, but I think it makes you consider your moves a lot more and I actually quite like it. Certainly, this game was very cinematic and had lots of high drama and tension and we all came away from it grinning like the proverbial Cheshire cat! I think we definitely have the beginnings of a campaign here and next we'll start to add in more gang members and give the ones that survived this scuffle some skills. All in all, I'd highly recommend this rules set for anyone thinking about gaming the Wild West!
Posted by Black Smoke at 23:34 10 comments:

Email ThisBlogThis!Share to TwitterShare to FacebookShare to Pinterest
Labels: Rules With No Name

I've started yet another project. Terrible, isn't it? But there's something about the nights drawing in that always makes me feel like painting the smaller scale figures. So, after purchasing Maurice and being mightily impressed by it, I got some Pendraken 10mm Austrians for the SYW. Now, normally I'd prime them black, but I'd read a few forum posts, and what have you, espousing the virtues of a grey primer with a black wash. Now, when I first started painting 6mm Napoleonics I'd actually used white and a black wash, but switched over to black later on. But I thought I'd give grey a try. However, I thought that the effect was acceptable, but not as crisp as a black undercoat. Also, I think the black is a bit faster, too, as you're not waiting for the wash to dry and you don't have to block the gaiters, cartridge box and tricorne in as they are already black.


Here are some side by side shots from different angles: 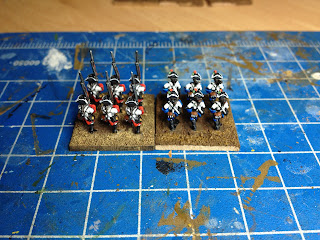 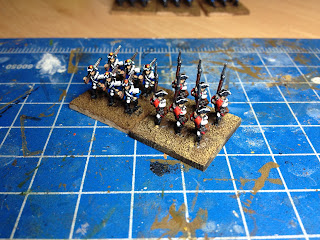 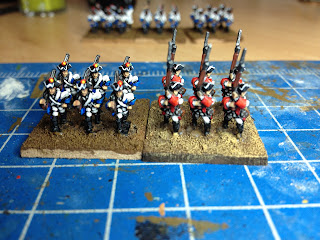 I realise the comparison should probably have used the same pose, but I think you can still clearly see the difference.
Posted by Black Smoke at 13:35 3 comments: