Hordes and Heroes on Hexes

Wow! Doesn't time fly? It's hard to believe it's been nearly a year since I posted anything here, but there's been a fairly good reason and, funnily enough, she is about 1 year old!

But I think it's time to get this show back on the road. My wee project that I've been working on recently is 10mm fantasy. I've long had a hankering for the good old days of WHFB where I built my armies up over time, playing a game, adding a unit and so on. These days I just don't have the time to paint that many miniatures and Warhammer is actually gone now, anyway. So, I turned to the small scale again and looked at Pendraken and Kallistra. Having always been a fan of hex based systems, such as Commands and Colours, the Hordes and Heroes rules from Kallistra really appealed and I decided to plump for some of their Hexon terrain too. So, after some furious painting to get two sides done (100 points each), George and I took the rules and terrain for their maiden voyage on Tuesday.

Both George and I agreed that the game went well and the rules were easy to pick up. The table looked great and it certainly gave me that 'big battle' feeling that I was after. What I really liked was the command and control rules, that didn't rely on random activation rules for battlefield 'friction', but rather it was contact with the enemy that brought your plans crashing down. I have already got more units to paint and we are both aiming to make up to 150 points for the next game.

Hi all! After a wee break from blogging (but not gaming or painting) I thought I'd come back with a black powder bang and write up a report of our latest Pulp Alley escapade. This game was held at the G3's annual Spencer Warner Memorial Games Day, which is a really good idea and all the proceeds go to the Macmillan cancer charity. Last year we did some dinosaur wrangling, so this year we thought we'd keep up the tradition of doing something a little different and blending genres. So, without any more preamble, I present Treasure Alley...!


The scenario was mostly a rework of the Mukubwa Shetani scenario from the Dirk Drake campaign last year. Basically, the crews had to get to an obelisk (major plot point) in the middle to decipher some runes which tell of the location of unimaginable riches. Unfortunately, they needed to 'persuade' one of the local native chiefs (minor plot points) to translate some of the more obscure runes first. Of course, these chiefs were escorted by some warriors who would move directly towards the nearest character in an extremely perilous manner..ahem! :) 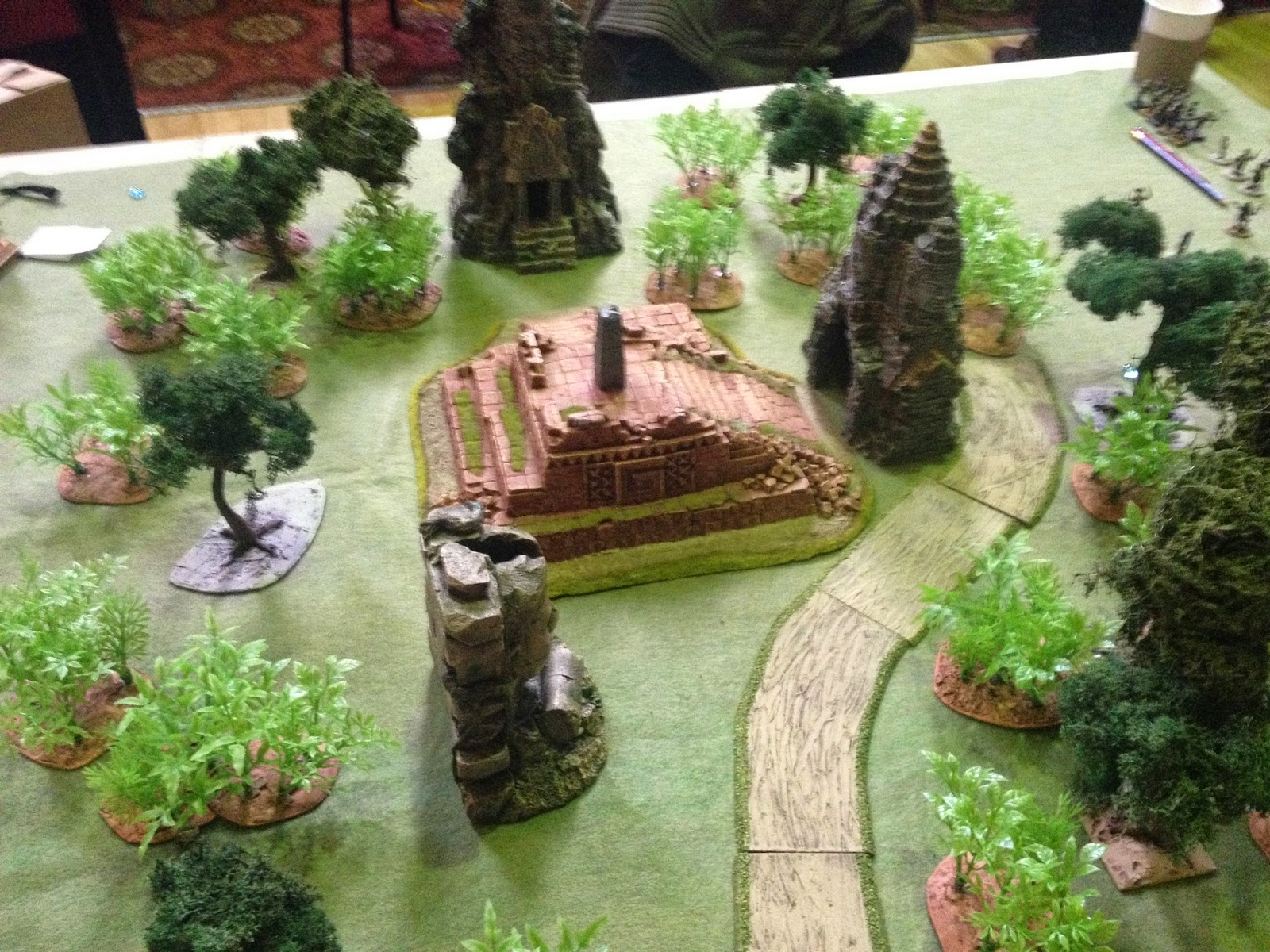 Of course, once the secret of the stone is unlocked, the powers unleashed will alert Kalinago, a twisted, necromantic shaman who is guardian of the stones and it's secrets.
And that's when we ran out of time! But that's OK. Nothing like a good cliffhanger! We have some ideas about how things pan out and we'll certainly be picking this theme up again. Overall, for some reason, Pulp Alley really, really suited this setting and I think George and I came out of it with the view that this was our best game of PA yet. I think that central to this was the black powder rules. We used the option of having to spend an action to reload their guns, which meant that the movement and positioning felt a lot different. It also meant you thought twice about dodging over firing back and promoted the cutlass and sword over the pistol. For example, Trelawney's men managed to get a single volley off before the natives charged and then it was all hand to hand. This just felt right and gave a really exhilarating and cinematic game.

Once again, Pulp Alley proves it's pedigree and I promise not to leave it so long again before I post the sequel!
Posted by Black Smoke at 23:46 34 comments:

Last night I painted up another of the Nightfolk range from Northumbrian Tin Soldier. This little chap is called The Hero and really sums up the quirky, unique nature of this growing range of figures. It's just so charming!

If you like this you should check out the latest sets to come out over the past couple of months. I'll have the 'Pythonesque' knights on this blog sometime in the near future.

So, here we are in July and this blog has been as quiet as ever! It really has been a slow year so far, but I haven't been altogether inactive on the painting front. But as a change of gear from the usual wargames figures, I tried my hand at something a little larger. The nice lady pictured below is a 54mm figure from Andrea Miniatures and was painted almost entirely with Scalecolor paints from Scale75. I really enjoyed painting her and it definitely stretched my techniques, blending and NMM in particular, which was really the aim. I've actually done a few extra wee bits since these pictures were taken but I hope you like her anyway! 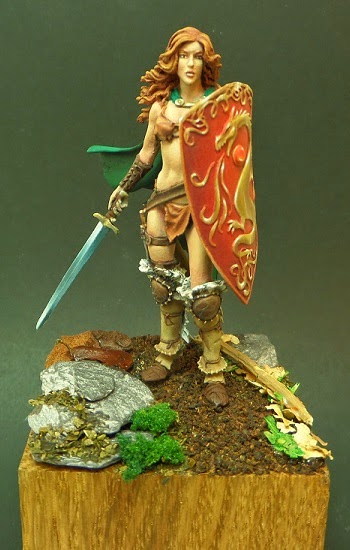 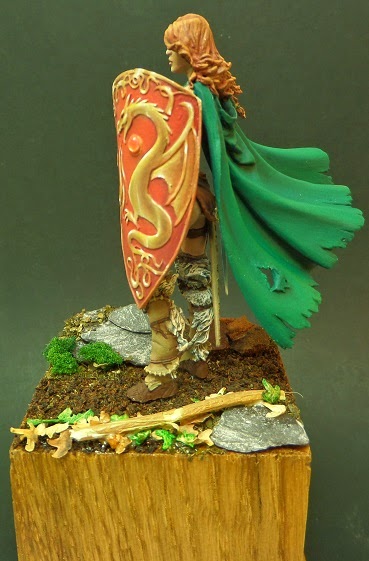 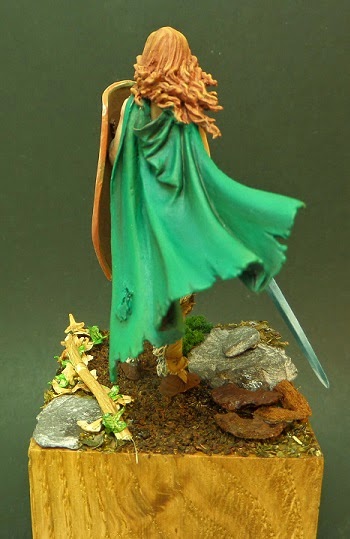 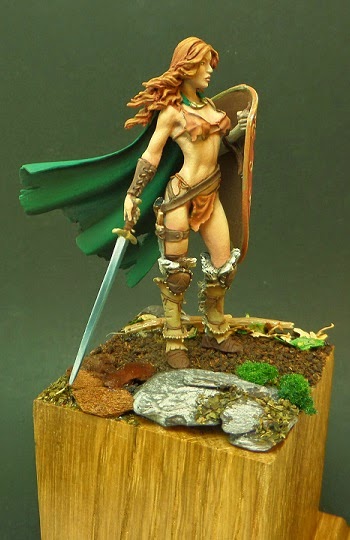 A week or so ago I played the fourth episode of our Perilous Island campaign with George and it was as much a hoot as always. Due to our terrain, and the fact that we've been in Africa already, we decided that the hunt for the old sailor should happen in Mozambique, which also gives us a nicely alliterative title!

This scenario was a lot of fun, with the 'red herring' rule meaning that there was a chance that a plot point would actually turn out to be a false lead. Also, the major plot point was only revealed by a random draw of the Reward cards, but any character attempting the a plot point had to have a minor plot point to have any chance of finding the old sailor, which added to the chaos!

So, on with the show!

Another great game and a satisfying end to Act I. So far, the cunning and wiles of Lo Chan Fu have had the edge on Cortese's sailors, but now the mind games are over. Who will survive the dangers of exotic predators and hungry cannibals as Act II takes us to - Perilous Island!